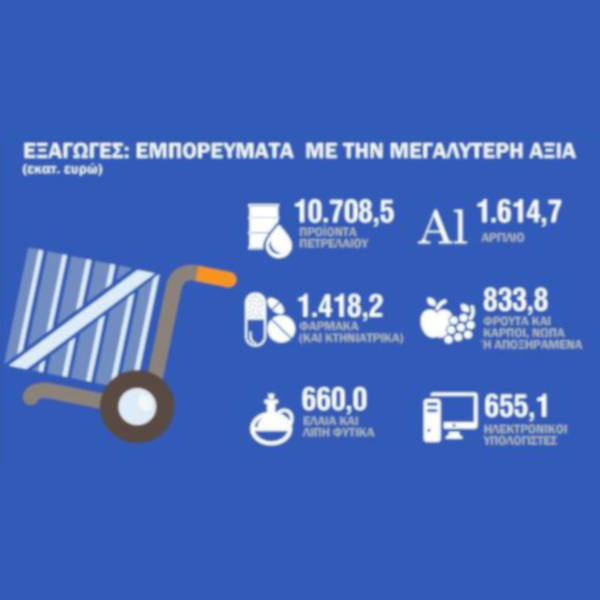 During the first two months of 2018, Greek exports of fresh fruit and vegetables had double-digit growth rate in both volume and value, compared to last year. While harvesting of “summer” fruits is starting, strong international performance is estimated.

“The indications for the course of winter products (citrus and kiwi) are favorable, which allows us to speculate that their 2017/18 marketing year will close with record exports of kiwi and tangerines.” Such continuous good performance enhances the weighted average value of all exported fresh fruit and vegetable products”, notes the specialist advisor of the Association of Greek Export Exporters of Vegetable and Juice Processing in Greece George Polychronakis.

In more detail, according to the latest data from the Hellenic Statistical Service of Greece (ELSTAT), which was processed by the Hellenic Export Association of Vegetable and Juice Processing Exporters Hellas, in January-February 2018, exports of fresh vegetables and fresh fruits increased in the first two months of 2017 by 14.5% in volume and amounted to 268,903 tonnes, and by about 20% in value, reaching 175.86 million.

Vegetable exports increased by 32.9% in the first two months of this year, compared to the same period last year, reaching 44,681 tonnes.

They dropped by 6.74% in value, compared to last year, at 31.48 million euros. However, they did not affect negatively the positive sign on the overall picture of fruit and vegetables exports.

Exports of fruit increased by 11.4% in volume and 28% in value to 224.222 tonnes and 144.38 million euros in the first two months of this year, compared to last year respective period.

There was also a positive development in imports of fresh fruits and vegetables, which declined both in volume and value in the first two months of this year compared to last year respective period, thus helping to reduce the trade deficit.

Specifically, according to ELSTAT data, which was processed by the Assosiation, in the first two months of this year and compared to last year respective period, total fruit and vegetable imports to Greece dropped by 16.3% in volume and reached 103.015 tonnes, compared to 123.139 tonnes in the first two months of 2017, while in value dropped by 13.1% to 86.805 million euros, from 99.849 million euros.

Current estimates are highly positive for the first exports of summer fruits. Harvesting for apricots, watermelons, peaches has begun and production has increased compared to last year. For example, regarding cherry everything shows that we will have a good production and very good quality. It is noted that cherry is a purely exportable product and there is interest from overseas markets.

Predictions from the Association estimate that the value of fresh fruit will rise faster than the volume of the amount in the EU market during the upcoming years. This is due to a shift in European consumers’ preference for fresh fruit than processed fruit, regarding the tendency to more ‘expensive’ fruit –such as berries, strawberries, forest fruits, new varieties of melon, avocado, mango, kiwi, new varieties of apples and table grapes, than traditional fruits -such as oranges, apples and melons.

Modern, impressive website acquired by Sarvanis Farm
These are 11 + 1 easy ways to incorporate fruits and vegetables into your diet

Any cookies that may not be particularly necessary for the website to function and is used specifically to collect user personal data via analytics, ads, other embedded contents are termed as non-necessary cookies. It is mandatory to procure user consent prior to running these cookies on your website.