The story of Sarvanis Farm Company is intertwined with love for the Earth, specialized knowledge of fruits and vegetables and almost 30 years of experience.

It started in Athyra, in Pella prefecture, in 1978 by Athanasios Sarvanis with some small cauliflower crops which he distributed both in the Central Market of Thessaloniki and in the Industries of Northern Greece.

In 1989, his son, Lazaros Sarvanis, became in charge of the company. He increased the crops and added a new product for that time in Northern Greece, the broccoli, to larger areas.

In 1994, an individual business is established which is housed in rented premises. Year by year both the crops and the sales are increased. In 2002 the company acquires proprietary facilities with filters – packers and refrigerators in the same area.

In 2002, the collaboration with big Super Markets begins, first in Greece and later on in Germany, the Netherlands, while new European countries are constantly being added, thanks to the consistently high standards of the products offered.

At the same time, the range of production products is enriched. The large scale production capability and the vertical process up to the shelves make us competitive all over Greece.

We will be glad to meet you for possible cooperation. 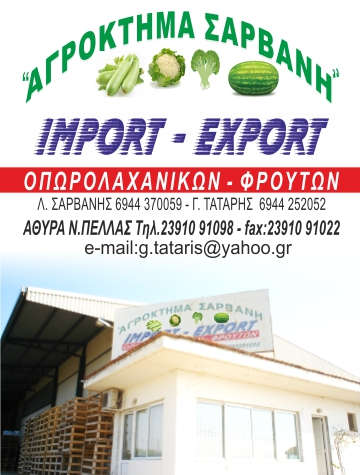 Our products, which are all locally produced, adorn the shelves of both Greek and European S / M.

All our products are produced and certified with the international quality assurance standard GLOBAL GAP.

Any cookies that may not be particularly necessary for the website to function and is used specifically to collect user personal data via analytics, ads, other embedded contents are termed as non-necessary cookies. It is mandatory to procure user consent prior to running these cookies on your website.